I don’t think it’s controversial to say that being in nature is one of the greatest simple pleasures on Earth. I mean, what’s nicer than lying in a shaded spot in a park, cool blades of grass against your skin; a breeze carrying the scent of spring bloom; a slow whoosh of branches and leaves overhead?

On days where I find myself tethered to screens and technology for stretches of time, ditching the indoors and opting outside helps me clear my mind. Something about green spaces just makes me feel alive. Turns out, there might be some weight to this. In 2016, research associate Peter James and a team at Harvard University published a study that looked into the relationship between green spaces and mortality rates. “[Humans] certainly value nature inherently,” says James. “We’ve been trying in recent years to quantify that and understand it better.” According to James, the idea that nature restores your cognition and your mood have been around for a while. In 1984, American biologist E. O. Wilson coined the theory that humans evolved with nature to have an affinity for nature. Around this time, Japanese doctors also developed the practice of shinrin-yoku, or “forest bathing,” to prescribe to patients in order to lower heart rate and blood pressure. Since then, multiple studies have been conducted around the world that hint at the health benefits of being around nature. “But those studies all had some errors or some shortcomings,” explains James.

So James and his team studied 100,000 female nurses living across the U.S. over an eight-year period, using NASA satellite maps to measure the quantity of vegetation in given areas. “What we observed was that the participants who lived in the top quintile—the 20 percent of greenness—had, on average, about a 12 percent lower mortality rate over eight years, compared to the lowest quintile of greenness,” says James. “So, people who lived in the greenest areas tended to die at lower rates over this [period].” James and his team then became interested in learning what factors could explain the association between greenness and mortality. They then looked at the four main pathways that researchers consider for greenness to affect health: providing an opportunity for physical activity; lowering exposure to air pollution; increasing social engagement (people might be more likely to interact socially if they’re in a green area where people commonly gather); and mental health. In exploring the mental health factor, they gathered and measured information on self-purported, doctor-diagnosed depression and antidepressant medication from the study's participants.

Read more: Does anyone care about the Earth after Earth Day?

“Interestingly, all of those factors did seem to explain some of the association between greenness and mortality,” says James. “But we were really surprised that the mental health pathway explains 30 percent of the association—the largest explanatory factor. That tells us there might be something about living in or near nature that has some sort of an effect on our mental health.” If these findings make you suddenly hesitant about living in the city, you have nothing to worry about: “A lot of people have read this study and said, ‘Oh, so you should move to the country!’ That’s not actually what we found,” says James. “We found that greenness, even in urban areas, seems to have some sort of benefit.” Even though these findings all hint that there's a direct cognitive effect of viewing nature that might improve our mental health and subsequently decrease our mortality rate, James points out that this is, of course, only one study, and larger research still needs to be done. Regardless, this study certainly contributes to the growing body of evidence that greenness might be beneficial for health and mental health.

Take the time to connect with the world around you with this mini-meditation: 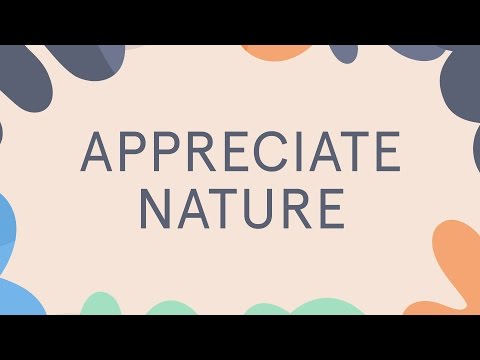