How to get laser-focused on your fitness goals

What is focus? It’s not as straightforward as it might seem. Is it being able to study for three hours straight? Or is it the ability to get through a pile of emails without getting distracted by coffee, cake, and pictures of crazy cats? And what about when it comes to sports?

Jim Taylor, from the University of San Francisco, believes you need to start with the attentional field to really understand focus. The attentional field, he says, “is everything inside of you, including sights and sounds, on which you could focus.” And thus, the definition of focus is actually “the ability to attend to internal and external cues in your attentional field.” But is it really that simple?

Being clearer on what focus is may help us understand how it fits into the world of sport, but it’s still complicated. Given the number of internal and external cues that are vying for space in an athlete’s attentional field, focus can be challenged in a multitude of ways on the pitch, pool or track. For example, a swimmer at the start of the 200-meter freestyle would need to focus internally on their strategy for the race, e.g., spend the first 50 meters relaxed focused on technique, the second 50 meters firm, the third 50 meters strong, and final 50 meters all out. Soccer players, on the other hand, constantly switch their focus from a wide external focus as they scan the defensive and attacking positions on field and then narrow their focus as they see opportunities to make a break or pass the ball. Even off the field focus is constantly challenged with athletes describing the need to focus internally on their own performance and not get caught up with what their competitors are doing during their preparatory routines. Similarly, coaches regularly ask their athletes not to ruminate on a poor performance and instead direct their focus to the next game. Not to mention all the focus needed when it comes to skill development, conditioning, and nutrition. So with each foci vying for a portion of the athlete’s attention, how deal with it and how do they prioritize?

Specific strategies around focus can enhance the learning of new skills and lead to an optimization of performance. From a research perspective, attentional focus relevant to sport has been viewed, characterized and studied in many ways. Within this research, the most consistent and convincing finding is that the use an external focus (EFA) (e.g., on an external implement) elicits a greater benefit in comparison to an internal focus (IFA) on body movements. For example, in a study examining competitive boxers and kickboxers, individuals punching with an EFA (e.g., punching the target fast and forcefully) were 4 percent faster and 5 percent more forceful than those punching with an IFA (e.g., moving their arm quickly and forcefully). Similarly, in highly trained collegiate athletes, an external focus of attention resulted in standing long jump distances that were significantly greater than an IFA or control condition. Even activities less focused on raw power have been shown to benefit from an EFA. In swimmers, adopting an EFA during front crawl (e.g., pushing the water back/down) resulted in significantly faster swim times over a single lap versus a group adopting an IFA (e.g., focus on pulling your hands back). But perhaps most interesting is that focusing on one's surroundings during a treadmill running task results in a lower running economy, that is a reduction in the oxygen required to sustain the activity, than when attentional control was focused internally on either the running movement or on breathing itself. In other words, focusing on the room around them instead of their movement made running easier. So it would seem that in the context of sport and optimized performance, looking out at the task at hand is a better approach than getting caught up with your own inner thoughts and feelings.

Clearly there is accumulating evidence showing the positive effects of an EFA in terms of optimizing performance during sport, so strategies to encourage the development of an external focus are potentially valuable. Meditation could have an important role to play in enhancing task specific focus associated with external activities. Research shows that people who meditate stay on task longer, switch between tasks less often, and enjoy their tasks more. So once you have acquired a good EFA, it’s possible that meditation could be used to hone and enhance this focus for potentially greater sporting benefits. Or maybe just to make that fun-run a little faster. Learn more about Headspace for Sport: 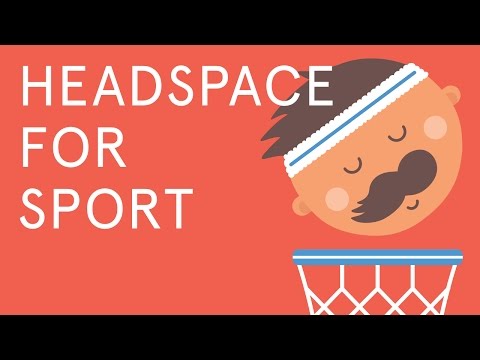