What do sprinting and sitting have in common?

You run like a caveman—literally. Running is so popular that it is programmed into our DNA, but it actually took almost all of human history up until now to develop into a common fitness activity.

For ancient humans, running was a means to an end. Hunter-gatherers ran countless miles to track and hunt prey for thousands of years. Humans eventually evolved the ability to run long distances with greater ease. As far as historical records go, we see the first recreational and athletic examples of running in Ancient Greece over 2,700 years ago with the Olympic games. The term “jogging” didn’t emerge until the 16th century, which referred to a favorite training method for swordsmen: running. It was around this time that running became recognized as a fitness aid rather than just a ceremonial or competitive activity. By the 1960s, both boxers and popular fitness books had made running America’s favorite fitness craze. The fever has only intensified. The New York Marathon saw more than 50,000 finishers in 2015, and the number grows every year. It makes sense that the popularity of running and fitness, in general, emerged after humans began to experience the negative health effects of the Industrial Revolution. With the spread of popular entertainment, smoking, and processed foods, the developed world experienced a major health scare in the 20th century when cancer rates skyrocketed. One imagines fitness emerged to combat this, and maybe it has—cancer-related deaths are down more than 20 percent since 1990.

Something else emerged in popular consciousness in the 1960s: meditation. We might see meditation as the mental complement to running, in a sense. Humans had trouble adjusting to the fast-paced postindustrial life on both a physical and mental level. Popular exercise emerged as a solution to our physical problems; at a certain point, meditation arose as a solution to the mental and spiritual issues. Anxious and stressed out people found solace in discovering the peace in quietness, much in the same way their bodies found themselves at home in the practice of running. Many runners start using exercise as a way of losing weight or getting healthy, but they get hooked on self-improvement. That’s because running is scientifically proven to lower blood pressure, negate stress, and increase confidence. It's a deliberate and tried way of regulating the body. We recognize this when we look back at the history of running; ancient humans had to run to survive. Modern humans can survive just fine by being sedentary, but the part of their humanity that requires physical exertion is missing. This causes problems that exercise helps counteract.

Similarly, meditation and contemplation have been practiced by humans for thousands of years, dating back more than 8,000 years to ancient India. Meditation remained popular among religious people for thousands of years. As the developed world grew less religious, spiritual practices declined—much in the same way running declined as a result of modern comforts. For a time, it seemed like people lost sight of the relationship between physical and mental health, but meditation, like running, is more popular than ever now, and the combination of the two has proved to be mutually beneficial. In a way, deciding to run and meditate in a world that doesn’t require you to do so is sort of religious. It’s an act of faith, not in any deity, but in yourself. People today are very distracted and often feel distanced from themselves, their bodies, and nature. It only makes sense that the person who discovers running as a way of optimizing themselves for life will also find solace in meditation and, in turn, that meditation will make them better exercisers. It rounds out the mind-body balance. Once you start these activities and really begin to see the benefits, it’s hard to stop.

Watch Andy explain how to sit for meditation:

Read more: A split-second decision that could change your weight 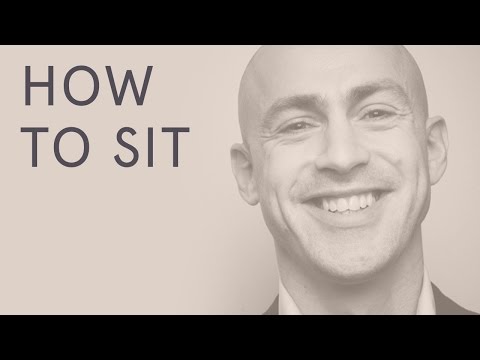 Meditation, like running, is more popular than ever now, and the combination of the two has proved to be mutually beneficial.