What’s the key to being a better cook?

For many people, meditation is a compartmentalized practice, a segmented break from the stress of everyday life. But if you take the principles of your meditation practice and apply them to chores and activities, you can reap meditation’s benefits (calmness, increased focus, less stress) all day long.

One of the simplest ways to do so? Approaching something you likely do almost every day of your life as a mindfulness exercise: making a meal. Cooking has several parallels with the practice of meditation. It forces you to slow down and focus: as anyone who’s tried to fry eggs with one hand while flipping pancakes with the other knows, multitasking while cooking leads to burnt food, fingers or both. Like meditation, cooking is a form of self-care. It’s a way to remind yourself that you’re worth the extra effort of a homemade meal, even if it’s simply eggs and toast. And while we’re typically glued to our screens for hours every day, cooking is one of the remaining dedicated screen-free times we have, giving our eyes and brain a much-needed break. You don’t have to be an award-winning chef or prepare elaborate meals to reap the benefits of mindful cooking. Here are some tips for bringing your mindfulness practice into the kitchen—and they might make you a better cook in the process.

You might listen to music or podcasts on your commute. Maybe you knit on the bus. And let’s be honest: you’ve probably taken your phone into the bathroom with you. There’s nothing wrong with being entertained, but trying to do too many things at once can make you less able to focus and less adept at switching between tasks. For a calmer cooking experience, try cooking without distractions and focus solely on the task at hand, whether it’s chopping, sautéing, or kneading. Your thoughts will wander, and that’s OK, but try to focus as much as you can, enjoying the present moment. It helps you ignore the millions of things nagging at you, and you’re less likely to make a mistake. Unitasking has been valuable for pastry chef Liz Burnett, who’s struggled with anxiety and depression and now incorporates mindfulness into her baking. “When I am cooking, I allow myself to be in the moment. I need to be, as otherwise, a caramel can burn or a sauce can split,” Burnett wrote in an email to me. “Having something with a fixed end goal is comforting, and helps to bring structure to illnesses that can bring so much confusion.”

One of the key parts of mindfulness is simply paying attention. When you’re doing a body scan during a meditation session, you can become aware of the crick in your neck from staring at the computer all day, or a burning sensation in your calves from yesterday’s workout. Apply that sense of awareness to your cooking by tuning into your senses: hear the sizzle of oil hitting the pan, smell the aromatic garlic and onions, taste your woefully undersalted dish begging for some Maldon. And in return? You’ll have a deeper enjoyment of the food you’re about to eat. “The combination of creating something (which gave me a sense of having done something worthwhile) and spending time using a less conscious side of my mind (being guided by taste, smell and following instructions) seemed to give the active part of my mind a break,” Burnett wrote. “I went from having numerous thoughts about every possible thing, to having space and calm.”

It’s easy for thoughts to drift during meditation. Instead of being agreeably serene, your brain provides you with a highlight reel of everything embarrassing you said at work that week. Or, while you try to concentrate on slowing your breath, your brain drifts to the next season of “Game of Thrones”. And in a world of celebrity chefs and Pinterest desserts, it’s easy to bemoan your average cooking abilities, to beat yourself up about your limp soufflé or burnt toast. In both cases, the solution is the same: to laugh, forgive yourself, and remember that it’s an ongoing practice. “If you do make a mistake, they can usually be saved—don't give up!” Burnett wrote. “Don't see it as ‘trying to cook for mindfulness.’ Instead consider it ‘playing with the idea’ of cooking. Even if it all goes horribly wrong, you will have explored something new; and that in itself is a success.” Learn more about mindful eating: 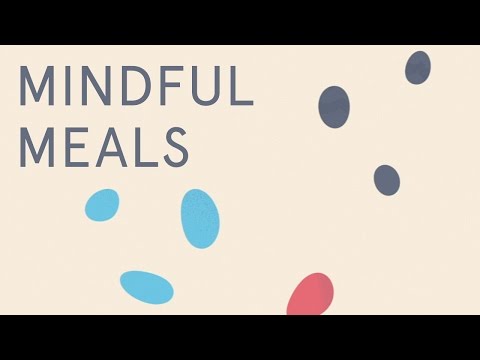