A Day With: Unipolar Depression

[Editor’s Note: This piece is part of an ongoing series of personal essays on what it’s like to live with a mental health diagnosis. Each piece describes a singular and unique experience. These essays are not meant to be representative of every diagnosis, but to give us a peek into one person's mind so we may be more empathetic to all.]

The steady buzzing invading my consciousness was my friend on the other end of the telephone asking if I'd managed to get home OK in the rain. After a moment of surprised silence, I told her that I hadn't seen her in weeks. I assumed that this was her way of telling me that we were overdue for a coffee together.

When diagnosed with unipolar depression ten years ago, I was struggling to cope with the aftermath of a relationship that had been filled with promise. Although that was the first trigger, my doctor told me that I'd likely been suffering from a version of this illness since my teens, which didn't come as a surprise to me. I'd never heard of the condition, but soon read everything I could get my hands on. It's a condition that is defined by perpetual depression; there are no manic episodes to punctuate the depression like the ones that occur with the more well-known bipolar disorder. Unipolar depression is also known as major depressive disorder. It is defined as “a state of depression with all the classic symptoms (anhedonia and lethargy and sleep disturbance and despondency and morbid thoughts and feelings of worthlessness and sometimes attempted suicide) but with no known organic dysfunction.” As I battled to make sense of my world, and of this new development, it often felt as though I were walking around in a fog with cotton-wool soles. Then one day, I woke up to the possibility that I was losing track of time. I would suddenly fill in the blanks, but as I did so I would realize that I didn't remember living that experience. Like developing a photograph, a visual jolts a memory awake that is hidden deep within you, but its blurred outlines cause you to view your own life with distortions. It is jarring and disjointing. I would find leftovers in the fridge; food that I didn’t remember cooking or eating. During these episodes, I would shop for groceries, drive my car, ride the bus, and make appointments I couldn’t keep because I didn't remember making them. My therapist told me that what I so casually referred to as losing time is actually called dissociative amnesia. It's a condition that is often brought on by trauma and/or stress and can last for hours, days, and, even years. I began to feel concerned about drifting away from my life, but over the years I have learned not to be. My episodes are usually triggered by severe depression, and typically last for a number of hours; I have had a total of seven episodes to date. My therapist also told me that it is highly unlikely that I would do anything during these episodes that I wouldn't do outside of them. I still care for myself and for others who depend on me; I still make the same careful informed choices that I always make. I am, reassuringly, always myself.

Adjusting to life with unipolar depression has been a learning experience—one that will continue to provide growth. I know and understand myself, what I am capable of handling, and what I cannot. It is neither good nor bad; it just is. I no longer have a great memory, and I have a tendency to complain about my fuzzy brain during depressive bouts. To combat this, I began writing everything down. My life now is a series of lists, and they are my lifeline. “To-do this week,” “to-do this month,” “don't forget.” I also write down ideas for my novel, story ideas, ideas about ideas. Writing about the day is a way for me to also keep track of my dissociative periods; I know that if I find a day missing in my digital diary, it's probably because I was dealing with a dissociative episode. Both my unipolar depression and my dissociative amnesia could be immensely helped by medication, but I'm still not on any; my therapist and I were trying to find a cocktail of medicines that’d work best for me when my life imploded and I began having financial problems. I have also been plodding along as best as I can without therapy currently, though going back to therapy is a goal for me this year. My story is yet another reminder that mental health is important, and that everyone deserves access to quality healthcare, irrespective of financial conditions. There is absolutely no shame in needing medicine to live a good quality of life; unlike other people, my brain doesn't make the chemicals that I need to live a decent quality of life—it needs a little help to make that happen.

Her voice was both concerned and agitated. “I saw you earlier today,” she insisted. I shook my head. This was getting ridiculous. “You came to see me,” she said. “You wore your red jersey dress. I complimented you on the color of your lipstick. It was raining, and you said you'd take a taxi back. We called one for you but he could only meet you on the next road because of all the construction on this one. I couldn't find my umbrella, so you said you'd run to the end of the road to meet the taxi.” I only own one dress that fits that description. I walked upstairs, my friend still on the phone, and looked for it in my closet. It wasn't there. I found it in the bathroom hanging on the hook behind the door. It was damp. As the room reeled around me, I put my hand out and touched the solid wall. I heard myself say, “I think I lost some time again.”

The "A Day With Mental Health" series is brought to you by Headspace and Bring Change to Mind (BC2M). BC2M is a nonprofit organization built to start the conversation about mental health, and to raise awareness, understanding, and empathy. These essays will publish weekly on Headspace’s the Orange Dot. Read the rest of the series here. 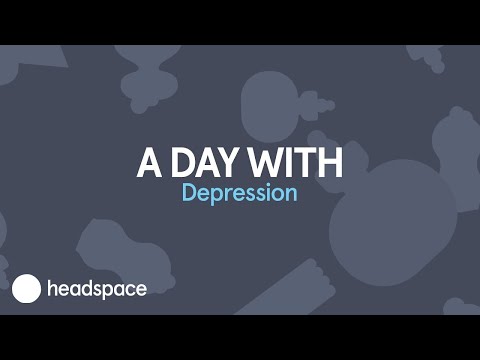